Before Covid restricted our activities this is what we got up to:

We used pocket computers, Raspberry Pis, (more info below) to run this class.  Each class we took out the equipment, put our computer stations together, and off we went!

THE AIM was have a fun and positive learning experience, where the children learn coding and enjoy using the computer, by making their own games and playing together on the network.

They used maths to make their sprites move around and  as there is a variety of  activities for them to choose  the children can work together or at their own pace as it suits them.  There are lots of stickers, certificates and prizes to recognize all the skills they are learning and games they create.

We flew high to space!

The children chose to enter a space competition for Space Week.

Floating in space! As part of this we watched some videos about life on board the International Space Station, and watched astronauts float around, brushing their teeth, and explaining how they go to sleep and more. 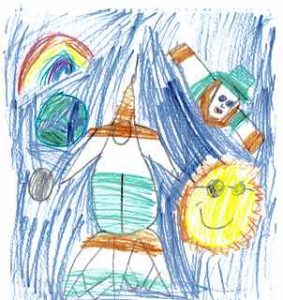 The New Year has brought a new project, programming the Botley Robot Car.  This car can be programmed on the remote, (screen free) to move around and avoid obstructions. It uses loops and if – then sequencing too.  This is particularly suitable for the younger children newer to coding.

Writing to Astronauts on the International Space Station!

The European Space Agency and Raspberry Foundation run an annual competition jointly to encourage coding and scientific investigations in space using the Pis and ‘sense hats’.

Some of the more experienced students  entered this international competition for primary schools and coded a message in Python on the Pis to run on LED lights on a ‘sense hat’ attached to the Raspberry Pi.  They wrote code measuring pressure or temperature on the sense hat in space  that will be read by astronauts on their Raspberry Pi on a space shuttle orbiting earth!  All this programming support was provided by Raspberry Pi org, thank you!

Click here to see one of messages in Python sent off to astronauts in International Space Station (ISS), saying ‘Hi’ and measuring temperature and humidity using the online virtual sense hat, a piece of equipment which can sit on top of their Raspberry Pi in real life and measure heat, movement and more. The messages from children around the world will be played in May 2021 and certificates will issue indicating their run time.

Other skills being learnt as they go along:

Maths is needed to plot the position of their animations and make them move:

There are some short stunning YouTube videos  with beautiful photos of nebulae and galaxies courtesy of the Hubble telescope, which I hope  encourages a wider interest in science.

is electronic music system comes free with the Pi, and some children have a lot of fun making tunes using this.

*** 20 Games to Create with Scratch by Max Wainewright

* Code Your Own Space Adventure by Max Wainewright (a bit wordy, students say)